3,2,1 … Record (How we did a full-length multicast production during lockdown) 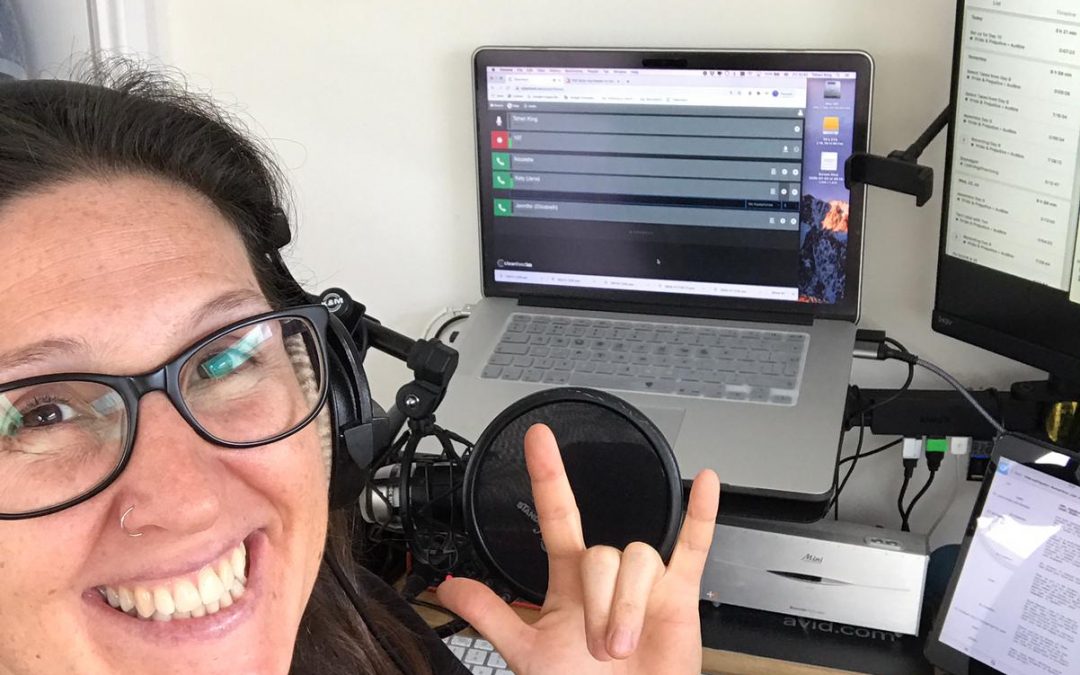 by Tshari King
(with editorial assistance from Chris Ekers)
.
WHERE IT ALL BEGAN
“…and this is the studio that we use for recording dramas…” Mariele was telling me. It was early March 2020 and I had made a trip to London to get a guided tour of where I’d be working that summer: In a studio that was built for purpose – recording voices!
. 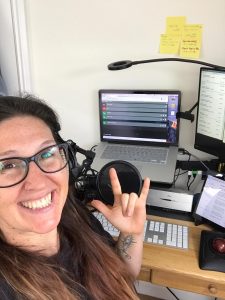 The Wireless Theatre Company has recorded many productions in very lovely professional studios but my own experience came from the company’s live shows. In the 10 or so years that I’ve worked with WTC, I’ve recorded audio dramas in theatres, large and small; conference rooms; huge live rooms designed for recording rock bands and ‘found spaces’ with ‘unique’ acoustics. It’s been a heady combination of fantastic fun and loads of hard work wedged into never-enough-hours. Over years of practice in many different venues, we’ve honed our skills and fine-tuned our productions into well-oiled machines.
.
So perhaps I wasn’t destined to work in the cushy, temperature-controlled environment of the professional voice studio: Lockdown came into effect pretty much the day that I got home from London, the events industry suffered considerably from the outset, and, for a little while, all hope seemed lost. Then I got an email: “We’re looking into the feasibility of recording remotely, do you think you’d be interested?”
.
TAKING TEA IN THE SAME PARLOUR
I was booked to record and edit the dialogue for a production which had been chosen for its good chances of remote recording success (no gigantic, space laser shooting, dragon fighting battles in mythical lands). The play is a period piece set in England, predominantly in the quiet of the countryside. The main obstacle I had to overcome was to take a group of actors who were spread out all over the country and get them to sound like they were all taking tea in the same parlour.
.
RECORDING 101
A professional recording studio should provide three things essential to making a quality recording:
.
1.  An acoustically-treated space,
2.  High quality, professional equipment, and
3.  Someone experienced in capturing the performance ‘magic’ at the highest quality possible.
.
In this instance I needed a cast of 19 actors to do all the work – the ‘studio’ was now in the homes of people who had spent their careers honing their acting skills, trusting the technical side to someone like me.
.
My first task was to figure out how to get the best recordings out of everyone without being there myself. I wanted the process to be friendly, enjoyable and comfortable – acting is hard enough without having to divide your focus with processes that you don’t normally have to think about. While there is software that allows multiple people to record simultaneously via the internet, initial tests didn’t work out as stress-free as I’d hoped: there were barriers to getting the results needed, namely internet drop outs and issues with needing to connect so many people at the same time.
.
After further tests, my solution was to have everyone record themselves onto their own computer while using software designed for recording over the internet as a “virtual” studio where everyone could hear each other. I would record a “guide track” using a feed from the same software which would enable me to sync up everyone’s individual recordings once they’d sent them over to me at the end of the day. Easy!
.
7 WARDROBES, SOME CUBBY HOLES AND A SHED

Even after settling on how to record, I was worried that it would be a huge learning curve for everyone to essentially become a studio designer and recording engineer while delivering a convincing performance as an actor at the same time. As soon as casting was confirmed I sent an email to each cast member asking how they felt about using computers, whether they had recorded from home before, what their equipment was, and most importantly, asking for a sample recording. 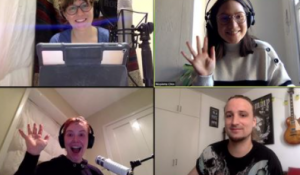 everyone to record the same piece of text, moving slightly further from their microphone with each verse. This allowed me to really hear the space they were in and see if it would work. When I had everyone’s recordings together in the same software, I could listen to each to try and match them up acoustically.
.
I was super impressed with the lengths that everyone had already gone in finding/creating a usable recording space. The wardrobe was the most popular (being the space with the highest density of fabric – highly important for making recordings with minimal sound reflections/echo) but we had some other interesting household locations such as; under the stairs, a cubby hole in the attic, a “den” made out of vintage bedding, a newly built homemade vocal booth in the corner of a room and, my personal favourite, a small shed built in the alcove of a large bedroom and “treated” inside and out with various soft furnishings.
.
TRY TURNING IT OFF AND ON AGAIN
Us humans have a tendency to find fear or anxiety in the unknown and working with unfamiliar technology is no exception: “What happens if I press this button?”, “Is it supposed to do that?”. As a ‘techie’, years of practice and learning that sometimes it’s okay to have leftover screws at the end of repair projects have given me the confidence to just press buttons and see what happens, smack things to make them work and boldly go beyond the warranty seal.
.
Most of the cast had not had that experience and were wary of their newly- acquired audio responsibilities. I did whatever I could to ensure everyone was comfortable using the various equipment they had – I learnt my way around 2 new DAWs (Digital Audio Workstation, or computer recording software), refreshed my memory on 2 more, wrote 4 tutorials and had many hours of phone and video chats, plus loads of emails. Finally, we were ready to record!
.
GETTING IT RIGHT AT THE SOURCE
We were lucky enough to be able to schedule in more days to record than we would have had in the studio and we needed them! It took me all of day one to figure out how to streamline the recording process (if there’s a better way to do this than by trial and error, please let me know) but from day two we were speeding along. Our director had thought of everything and managed it accordingly; the number of actors we could connect at any one time and keep the internet stable; upload breaks for sending files over to me so that it wouldn’t be a huge job at the end of the day; breaking up the script to keep things in the best order for recording.
. 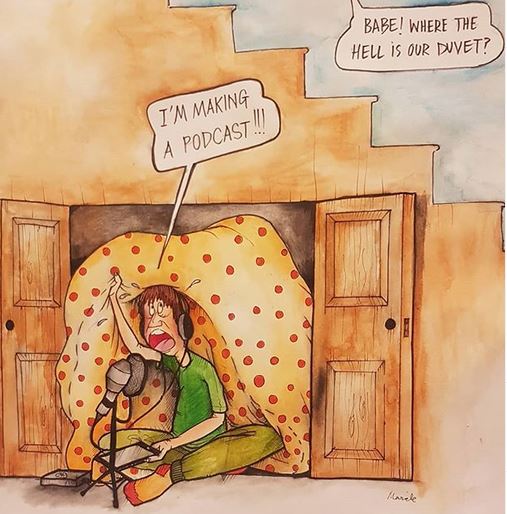 In a studio recording, the engineer would typically stop recording between takes but, as the cast were recording themselves, I didn’t want the recording process to get in the way of performance, so I opted for just pressing record at the beginning of each scene and letting it roll, getting them to make a “snap” sound at the start of each recording which I would use to sync up the multiple recordings later. We co-ordinated record and stops together and soon everyone was bored of hearing me say “we will record in…3,2,1, Record”, my new catchphrase “stop and save!” with some added, “don’t forget to save!” thrown in at random intervals. From then on, all we had to contend with were internet dropouts, passing aircraft (civilian and military), lawnmowers, neighbours (hammering and shouting), occasional traffic, seagulls and pigeons; hardly perfect ambience for a period piece!
.
Once recording was finished for the day, I consolidated everyone’s individual audio recordings into something resembling what you would get from a regular studio recording. This meant syncing up everyone’s files in my software, checking that it had recorded properly at their end and placing markers for each scene and take. It took a couple of hours each evening, but saved me many hours when it came to the edit.
.
The editing process itself went pretty smoothly. After the edit, the audio is sent to the Sound Designer who breathes life into the production and it needs to sound it’s best before handing it over. I had to spend extra time compensating for the now very apparent lag caused by the internet connections: I trimmed gaps between almost every single line and removed any little noises that we missed during the recording sessions, from the tell- tale creak of someone shifting in their seat to distant traffic noise.
.
THAT’S A WRAP
Teams up and down the country and across the globe have had to find new ways of doing what they do (in our case, create excellent audio) in exceptional circumstances. The longer this goes on, the more it feels like these exceptional circumstances may become the norm, and I feel very honoured to be among the engineers who have ventured into this new way of working. Not to make it sound like I boldly strode in and ‘saved the day’ on this production; it was all very much a team effort and a learning curve for all of us. None of this would have happened without the tireless work of the amazing director and the WTC team. Ask us to do another one and we’ll be better and faster; another 5 and we’ll do better than a studio production!