How To Format An Audio Drama Script 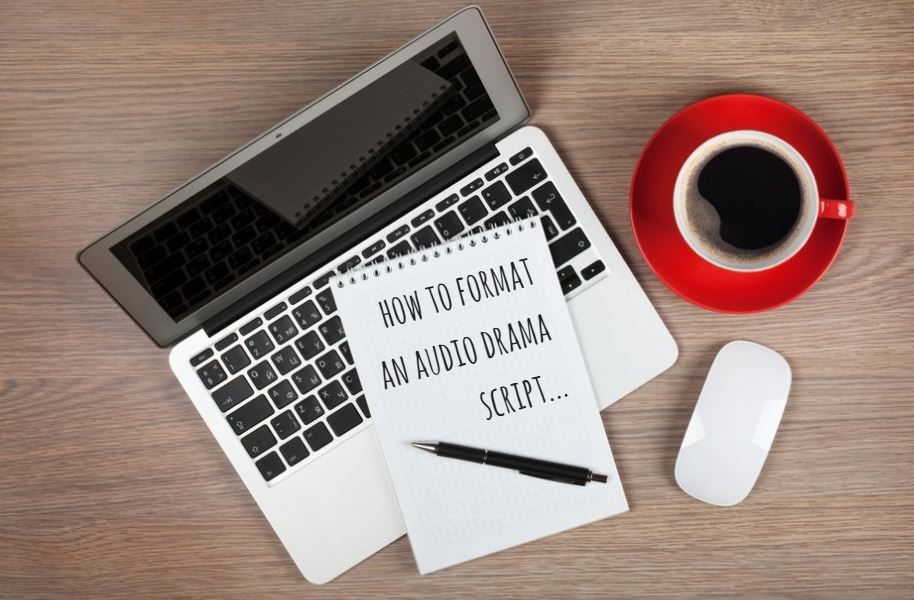 Of all the many questions I have been asked about producing audio drama over the years, one of the most frequent is; “How do you format an audio drama script?”.

When I first started creating audio drama, I presumed that the formatting for an audio script didn’t need to be any different to scripts of any other kind, but in fact, it’s more important than any other kind because the script is by your side the entire way through the audio drama process for everyone. Lines aren’t learned so it is vital that everyone is working from the same script, formatted in the same way. Believe me, a well formatted script can be worth it’s weight in gold. The easiest way for me to summarise why, is using the following breakdown.

1 Number the pages. Sounds obvious I know, but you’d be amazed how many scripts we receive with no page numbers. Opinions differ on the best way to do this, but not long ago I found myself being playfully yelled at by the wonderfully eccentric actress Miriam Margolyes. Her words echoed in my ears; “Who the hell do I have to f*ck to get the page numbers in the TOP RIGHT HAND CORNER OF THE PAGE?!!”. I sheepishly answered, “that would be me” and she went on to explain how much easier it is for actors to have it that way. I had always put the page numbers in the bottom right, but have since seen many actors clearly mark the page numbers in pen on the top right hand corner, leading me to believe that Ms. Margolyes is obviously correct and it makes those dreaded page turns considerably easier.

2. Number the lines. This is the killer. A good audio drama script needs to have each new cue numbered, starting from 1 on each new page. This is by far the most laborious part of the job (especially when you’re formatting a script which is 300+ pages). There is no programme which will do it for you – believe me, I have looked. Your best hope is that Word will recognise the pattern and make it a little easier as you go. It takes ages – but it’s very important for the entire process. In the studio it helps the director communicate with the actors “That was great, can we just redo lines 3 – 7 on page 444?”, meaning that people aren’t faffing around trying to find actual lines when you have precious little time in your £££-per-hour-studio. It also helps immeasurably with scheduling and editing.

3. Don’t split speeches over two pages. To avoid the dreaded page turns during a take (or a pause as the ipad flicks up) don’t allow a speech to be split over a page. It’s best to have it all on one page, even if it means you leave a gap on the page before. This also helps the actor – no one wants to pause in the middle of a great speech to have to quietly turn a page. It kills the moment.

4. New scene, new page. Yup, it makes the script longer and wastes paper, but it’s vital that new scenes start on a new page. It’s easier that way for all involved – for example, if you’re recording a very long (heavy) script, actors can just bring in their scenes easily without having half the scene before and after with them as well.

5 Mark SFX and Music cues clearly. Sound effects cues don’t need to be numbered but they do need to be clearly marked so that the sound designer can skim through and locate their cues easily.

6. Differentiate narrator text. Usually in bold, or italics. This means it’s easy to find if you record narration separately.

7. Use a clear, reasonably sized font. I prefer Arial, 12pt – but anything clear will do.

8. Descriptions or no description? Recently, after sending out the below sample of audio formatting to a writer, he emailed back wondering; why, in audio drama, it is relevant to state ‘day’ or ‘night’? Of course, a writer doesn’t have to specify these things, but they shouldn’t be put off doing so simply because it’s audio drama. The world being created is as 3D and immersive as any other medium and the cast and crew need to be able to feel this. These aren’t just words on a page. In the below example, the scene is an amateur dramatics rehearsal of Romeo & Juliet. The writer has specified it’s night time – but they’re inside and, with no visuals, is this necessary? Yes, it’s useful for the actors to help create their characters. Most of the characters have probably come to rehearse after work and aren’t getting paid, maybe they’re tired, maybe they’re hungry… I’d argue that well placed hints about the actors surroundings and environment are a huge help. Not to be mistaken, however, for lengthy descriptions of visual set design clearly left over from a lazily ‘adapted’ stage script.

9. List of characters. This is something that I just prefer as it’s a huge help when casting if characters are listed, and even better with a short description including age. It’s a really handy reference. 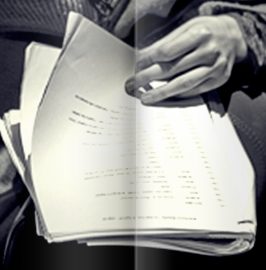 Below is a sample of audio drama script formatting. This is by no means gospel and many other companies may do it differently, and everyone must find what works for them. This is how we do it based on our experience of producing audio theatre and also of what seems to be most helpful to the actors and crew we work with.

Writing an audio drama script is the start of a hugely exciting production process and over the last three years I have seen the online audio drama community grow and grow. It’s inspiring and thrilling to watch it develop and if this article in any way helps someone wanting to get into writing audio drama, then that is a gooooood thing.