(“With this step we enter the future of mankind.”)

These days it often feels like we’re living in a far-fetched and darkly satirical parallel timeline. As the UK drifts into some murkily defined isolation, emboldened fascists sieg heil under the twin banners of the Stars and Bars and the swastika, and Donald Trump – Donald bleeding Trump – tweets alt-right alt-facts from the White House, it seems a good time to explore another parallel world inhabited by people who also suspect that history has taken a badly wrong turn… Wireless Theatre’s RED MOON.

The genesis of the project began in a not dissimilar way to that of The Springheel Saga; One evening, as we were strolling through Covent Garden on our way to the tube, Jack remarked that he’d always wanted to do an alternative history story, expressing his admiration for things like Fatherland as the reason (this was years before the The Man In The High Castle stormed our tellies). With the ‘Nazis Winning World War 2’ concept done to death, I suggested there’d be more mileage in finding another binary event of the 20th century – such as the moon landing – and that the (maybe too?) obvious title for such a tale would be ‘Red Moon’. 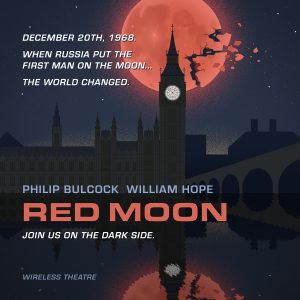 Heading our separate ways with an historical MacGuffin and a working title in mind, the question became: if the Soviets had reached the moon first, would America have let the space race end there or would they have pushed back the winning-post to the next logical point – lunar colonisation – and even armament? It seemed like a fun premise for a Harry Palmer-style thriller with sci-fi overtones, but the idea languished on the drawing board for a couple of years like the real-life blueprints for the Zvezda moonbase. However, after the double-whammy of Britain’s EU referendum result and the election of Donald J. Trump as the 45th president of the United States, RED MOON now seemed disconcertingly and depressingly relevant. We had all woken up in an alternative reality, and the question of ‘What If?’ was suddenly less interesting and pertinent than the question of “What Now?”. RED MOON, in a very minor way, is an attempt to address that second question.

RED MOON is an alternate history, cold war audio thriller in six phases. Phase 1 – “Moonrise” – is out now, and as long as tensions between Washington and Pyongyang don’t escalate, I hope you make it all the way to Phase 6. But with the speed that global events are happening at the moment, who knows what the world will look like when you do?

Listen to Episode One of RED MOON via Audioboom free now.