My First Page, By Ollie Cookson

Ever since I was a boy I’ve grown up around scripts. Being the son of a incredibly talented and successful BBC radio producer/director, our house was littered with written works by a number of different wonderful writers and on occasion an actor or 6. So much so that until the age of about… well to be honest, as soon as my voice broke, I had a career as a voice actor. Although my survival rate in these plays was about 20% (10 plays and I’m right in thinking I died in about 8 of them) the thrill of being involved in something so real on the page really struck a chord with me.

Then my voice broke, I became a grumpy deep baritone’d teenager. But I began writing. My first written short story was about a group of teenagers who get lost in the woods. It was crap, I remember it being crap because I remember crying a lot because of how crap it was. I don’t want to say that this stopped me, but I certainly took a step back and concentrated on being a teenager for a while, i.e. just about passing Chemistry and drinking half a bottle of beer and thinking you were cool.

Storytelling Of A Different Nature

This attitude started to change as I got older and by the time I reached University I started getting back into story-telling, but of a different nature – script writing. I studied modules involving short films and story telling while also still attempting to put together novel work at the same time. This culminated in a third year at University, where I was expected to not only hand in my final piece of script writing work, a 15 minute/page script, but also a dissertation and 5,000 words of my own novel. I felt disinterested in novel writing at times because I only had my eyes on the script. However, after (probably too much) coffee and a cry or two, I completed all of the required work and graduated.

Now, I wish at this point I could write about how I suddenly became a screenwriter as if I was evolving like some sort of Pokemon, but no, I’m not there yet. I worked in a cinema for 2 years, all the while ‘attempting’ to be creative but really all I was doing was telling people I was a writer, and then lying to myself when I got home from a 15 hour shift. I was made redundant and left with a newly entitled sense of motivation, being unemployed. I had to suddenly make a career of this, as if it would just appear out of thin air. The problem I found is that it didn’t… at first. 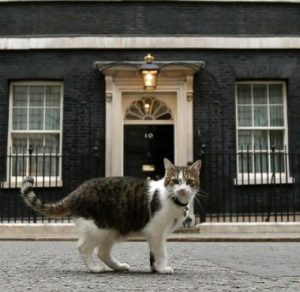 Then on a Tuesday afternoon, eating my third bowl of Crunchy Nut Cornflakes and most likely sitting in my underwear, my flatmate stumbled upon a news article that would become the basis for the beginning of my career.

‘Downing Street Cat On The Prowl’!

I’ve always considered myself a creative person. Even if I’m not actually writing, I tend to see and or hear about a piece of news or an individual and begin to wonder to myself, ‘that would be a good film/play/TV show’ etc. At first I just laughed at the picture, read a few lines of the article and went back to being a messy unemployed ‘writer’. Then a few hours later something began triggering in my head. Maybe this was a good idea for the page…. So, after weeks and months of being an unemployed mess, I started working. I dragged up as many files, articles and whatever I could on this little feline and began reading. It was purrfect (sorry), this little cat lived on the most important street in the world, and he was a cat. It couldn’t fail. Then the worst possible thing happened to me. I got a job.

And So I Wrote…

I began working back at my old University’s sports department doing invoices, sending emails to stupid students and generally just trying. However, in my complete hatred of doing mundane admin, something happened that really ignited this idea. I did all the things that were required in the job but any time I had nothing to do, I wrote. It began with simply the plot outlines, nothing too over the top or bombastic, just the simplicity of a cat trying to navigate its way around life.

I finally became this writing workhorse! All the invoicing and emailing that I had to was then followed by half an hour of cat dialogue. So much so that my boss probably thought I was one of the harder workers because of how much I slapped the keyboard! I also imagine it’s one of the reasons why I accidentally paid a coach £1 instead of £800.  The weird thing was that I barely wrote when I was home, 70% of my work was done in the office. By the time I left my thrilling job I had outlines for 3 episodes of an audio drama and pretty much a fully written pilot episode.Time to actually make the thing.

How To Get It Made? 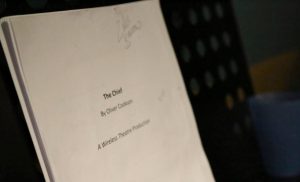 My mother had been re-structuring her career after a difficult period. She had begun working with a great new audio drama production company, Wireless Theatre, who had enabled her also to begin working with Audible, the Amazon led monster of audio drama. Even though feedback from people I had sent my script to had been very positive, I still had that nagging voice in my head telling me that it wasn’t good enough. But the only advice I can ever give to anyone is to ignore what that twat is saying and listen to others. So I did and my mother began sending it out to anybody who might be able to make it happen. Despite the positive feedback we had been getting, we were mostly told that it wasn’t the right time to be doing a play of this type.

This is where I have Mariele (Runacre-Temple) and the wonderful Wireless Theatre Company to thank. We sent the play to Mariele, without telling her that it was written by the son of one of their most prominent producers. Her feedback was very kind considering she had no idea that it was from me. But it wasn’t just her  praise of the work that really lifted me, it was her general enthusiasm. It’s obviously important as a writer to have faith and passion in your own work but when you have somebody telling you how much they have loved the script, and someone in a position to get it made, that ultimately is the thing that gets it over the finishing line. We decided that getting it made through Wireless Theatre was easily the best course of action. So, while I was on the look out for a new job, my mother and Mariele began relentlessly casting. We began filling up the positions quickly with a variety of unique voice talents. At this point it really did dawn on me that something I had written was about to be produced, I was about to have my very first credit as a writer. 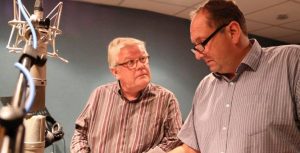 Going into the recording day, we still hadn’t acquired a voice for our main part so that would be done at a later date. The day would involve recording all the smaller parts. I was incredibly nervous. I tried not to show it but my butterflies were having butterflies.

As actor after actor showed up I introduced myself and tried my hardest to come across as the kind of person who was capable of writing such a thing. Eventually as we began the read through and eventual recording process in the studio. I found it strange being so up close and personal to the production experience. Normally if I was over at my mother’s when she was recording, I would gather a plate of resources from the kitchen and evacuate to my room awaiting the array of wacky noises from below. This time though I was staying and answering questions on my work. Bizarre to say the least. The feeling of dread at being right in the thick of the process quickly left as I remembered the support and kind praise from everyone, most notably Wireless Theatre and before I knew it, I was actually giving actors notes 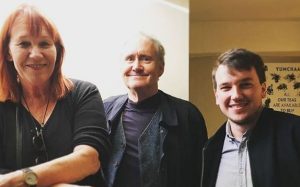 on how their characters should say certain lines etc. The day was a huge success leading me to feel like this was the first day of the rest of my career.

Moving onto the leading part, Mariele did a fantastic job in getting the legendary Nigel Planer to voice Oscar the cat. Meeting him and recording his lines, I felt an even heightened sense of nervousness, this was a legend of the comedy game and a seasoned writer, and I was just at the beginning. But again the support I had received enabled me to  push through the nerves and realise that, I deserved to be here.

I’ve probably rattled on a bit too much about this crazy experience of having my first piece of work published, but the reality of it is that, without the incredible support of Mariele and the WTC, this script would probably still just be a script and I’d probably just be sitting here wondering if one day something would come of this random idea I had. The WTC have enabled me to really begin my career or at the very least help a very new writer have a chance. And to me this is what a company like this is so very great at. Giving chances to new talent. I’m currently working on the second episode of the series so hopefully once I get my head into gear we can work on that further, but once again, having the opportunity to work alongside such wonderful talent while also experiencing the life of a writer, just for the day, was everything I could have hoped for.

You can listen to Ollie’s radio play, THE CHIEF, starring Nigel Planer, for FREE via our Audiboom channel.

You can subscribe to The Wireless Theatre Company for over 200 original audio dramas here.

Watch the animated trailer for ‘The Chief’ by Nick Page: